Tag Archive for: one fly

Greetings fellow fly flickers.
The start of a new Club year and your new committee looks forward to working out a program of interesting trips and speakers for 2015.
The reports from the Howqua and other streams – our usual fishing haunts don’t appear to be promising. We’ll……….

Seventeen members took up the competition challenge and headed to the Alpine Trout Farm at Noojee on Saturday, September 21st for the annual club One Fly. The competition took place in two sessions with half the group fishing whilst the other half acted as stewards to measure the catch. There were plenty of fish in the pond and members were soon practising their “take” technique and landing all varieties of fish (including browns, rainbows and brook trout) to be measured by the stewards. The recorder was kept busy with some members taking over 15 fish in the 90 min session.

After the morning session the group gathered for a delicious BBQ lunch and a few convivial drinks. 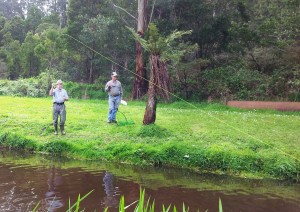 President Russell shows us how.

The afternoon session was just as action packed – especially when some of the anglers discovered the outlet drain from the shop where a large number of fish were pooling to feed.

The eventual winner after a “gentleman’s agreement” was declared to be Peter Cattermole who landed a 48cm fish, runner-up was Mark Scheimer also with a 48 cm fish and Jon Klarenbeek came in third place with a 47 cm fish.

The placegetters were presented with prizes sponsored and supplied by Gavin and the ProAngler team. These were a 1-2 wt rod, 4 wt reel, and a roll of fly line.

All present commented on what a great fun day it was – blessed with warm sunny weather, fantastic fellowship, a picturesque venue and scrumptious food. All present are looking forward to a return bout next year albeit with some modified rules.